Gluten-Free Blueberry Buckwheat Teff Buttermilk Waffles: You can make amazing buckwheat waffles at home now! These waffles are fabulous — try them and you may become addicted!

A light and fluffy Belgian waffle with the perfect flavor combination from Blueberries, Buckwheat, Teff, and a hint of Cinnamon. With your own waffle iron, you will soon find you are not missing out on anything when it comes to your waffles. Enjoy! 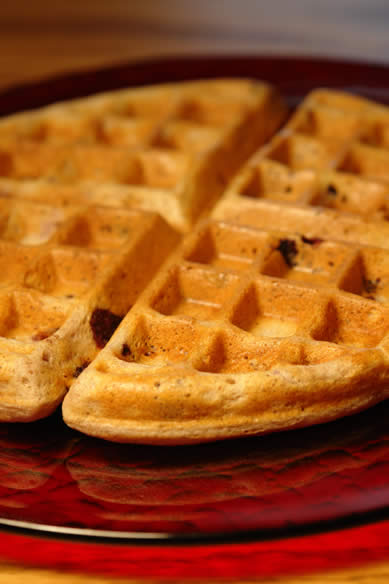 Separate the eggs, placing egg whites in mixing bowl and yolks in large bowl. Beat egg whites until stiff. Set aside for later use.

To cook waffles, follow the instructions that came with your waffle maker, or the following generic version.

Generic instructions: surface of waffle maker griddle should be covered approximately ⅔ of the way with batter (too much batter will cause the batter to leak from waffle maker). Waffles should be allowed to cook until steam stops escaping from waffle maker. We have a Black & Decker Belgian Waffle Maker (model WMB500) and waffles took 6-6.5 minutes to cook in this device.

The picture of the finished waffles (above) says it all: fantastic!