Low in fat and calories and high in protein and fiber, the soup is both filling and satisfying to the palate.

Although my taste buds are not quite evolved enough to discern the flavor of the coffee in the soup, the taste and texture are winners in my book. With an initial rich and smoky taste (from the smoked paprika), the soup’s subtle heat — courtesy of the jalapenos — hits your palate late, making for a complex and satisfying eating experience.

Moreover, I garnished my gluten-free and vegetarian Black Bean and Coffee Soup with a dollop of no-fat Greek yogurt (make sure you select a gluten-free brand!) and cilantro, both of which garnishes added an extra layer of complexity to the soup’s taste and its texture. And, while avoiding the calories and fat in sour cream, the no-fat Greek yogurt also provided a refreshing creaminess that made the soup feel less healthy than it actually is! 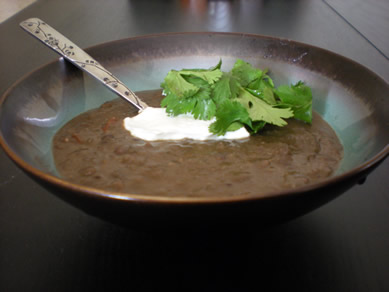 Heat oil in a pot or dutch oven over medium-high heat. Add the onions, bell pepper, celery, jalapeño and garlic and cook, stirring frequently, until the vegetables are beginning to brown, 5 to 8 minutes. Note: choosing a large enough pot to ultimately accommodate ALL ingredients will avoid the need for transferring to a larger pot later.

Add remaining ingredients keeping in mind you may wish to add salt/pepper to taste *after* cooking. Bring to a boil, stirring occasionally. Reduce the heat, cover and simmer until the beans are very tender: this should take between 1¼ to 1½ hours.

Carefully pour about half of the soup into a food processor or blender and puree until fairly smooth consistency. Pour this back into the non-pureed soup.

Serve the soup garnished with a dollop of plain Greek yogurt (as shown) or sour cream, and cilantro, if desired.